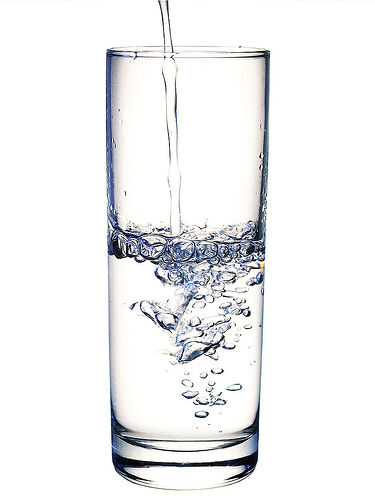 Water is the major building block of most life. It is both added to food as an ingredient and used to transfer heat for cooking.

For both such purposes, the water should be generally drinkable. Water is a common source of disease organisms. Boiling water for about 5 minutes should take care of this problem. Baked goods containing water also need to be kept at a boiling temperature to prevent the spread of disease.

Water plays many critical roles within the field of food science. It is important for a food scientist to understand the roles that water plays within food processing to ensure the success of their products.

Solutes such as salts and sugars found in water affect the physical properties of water. The boiling and freezing points of water is affected by solutes, as well as air pressure, which is greatly affected by altitude. Water boils at lower temperatures with less air pressure, which occurs at higher elevations. One mole of sucrose (sugar) per kilogram of water raises the boiling point of water by 0.51°C, and one mole of salt per kg raises the boiling point by 1.02°C; similarly, increasing the number of dissolved particles lowers water's freezing point. Solutes in water also affect water activity which affects many chemical reactions and the growth of microbes in food. Water activity can be described as a ratio of the vapor pressure of water in a solution to the vapor pressure of pure water. Solutes in water lower water activity. This is important to know because most bacterial growth ceases at low levels of water activity. Not only does microbial growth affect the safety of food but also the preservation and shelf life of food.

Water hardness is also a critical factor in food processing. It can dramatically affect the quality of a product as well as playing a role in sanitation. Water hardness is classified based on the amounts of removable calcium carbonate salt it contains per gallon. Water hardness is measured in grains; 0.064 g calcium carbonate is equivalent to one grain of hardness. Water is classified as soft if it contains 1 to 4 grains, medium if it contains 5 to 10 grains and hard if it contains 11 to 20 grains. The hardness of water may be altered or treated by using a chemical ion exchange system. The hardness of water also affects its pH balance which plays a critical role in food processing. For example, hard water prevents successful production of clear beverages. Water hardness also affects sanitation; with increasing hardness, there is a loss of effectiveness for its use as a sanitizer.

Boiling, steaming, and simmering are popular cooking methods that often require immersing food in water or its gaseous state, steam. Water is also used for dishwashing.