Chocolate comprises a number of raw and processed foods produced from the seed of the tropical Theobroma cacao tree. Cacao has been cultivated for at least three millennia in Mexico, Central and South America, with its earliest documented use around 1100 BC. The majority of the Mesoamerican peoples made chocolate beverages, including the Aztecs, who made it into a beverage known as xocolātl, a Nahuatl word meaning "bitter water". The seeds of the cacao tree have an intense bitter taste, and must be fermented to develop the flavor.

Chocolate is a popular ingredient and available in many types. Different forms and flavors of chocolate are produced by varying the quantities of the different ingredients. Other flavors can be obtained by varying the time and temperature when roasting the beans. Unsweetened chocolate is pure chocolate liquor, also known as bitter, baking chocolate or cooking chocolate, mixed with some form of fat to produce a solid substance. It is unadulterated chocolate: the pure, ground, roasted chocolate beans impart a strong, deep chocolate flavor. With the addition of sugar, however, it is used as the base for cakes, brownies, confections, and cookies. 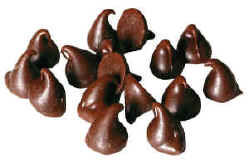 Chocolate chips are small chunks of chocolate. They are often sold in a round, flat-bottomed teardrop shape (similar to a Hershey's Kiss). They are available in numerous sizes, from large to miniature, but are usually around 1 cm in diameter.

Store chocolate well wrapped in a cool, dry place for up to 4 months.