Butter is a dairy product made by churning fresh or fermented cream or milk. In many parts of the world, butter is an everyday food. Butter is used as a spread, as a condiment and in cooking applications such as baking, sauce making, and frying. Butter consists of butterfat surrounding minuscule droplets consisting mostly of water and milk proteins. The most common form of butter is made from cows' milk, but butter can also be made from the milk of other mammals, including sheep, goats, buffalo, and yaks. Salt, flavorings, or preservatives are sometimes added to butter. Rendering butter produces clarified butter or ghee, which is almost entirely butterfat.

A firm solid when refrigerated, butter softens to a spreadable consistency at room temperature and melts to a thin liquid consistency at 32–35°C (90–95°F). The color of butter is generally a pale yellow, but can vary from deep yellow to nearly white. The color of the butter depends on the animal's feed and is sometimes manipulated with food colorings, most commonly annatto or carotene.

Traditionally, salt was added to butter as a preservative. Now salted butter is considered the norm.

Unsalted butter is simply butter with no salt added. It is often used in baking. Because there is no salt in it, it tends to spoil more quickly.

Whipped butter is a type of butter that has been whipped to mix in normal air or nitrogen gas. The point of whipped butter is to create something that spreads more easily, even after it has been slightly chilled. Many companies also create whipped butter as a way of increasing the volume of the substance without actually adding more butterfat. By law in the United States whipped butter has to contain at least 25% butterfat. 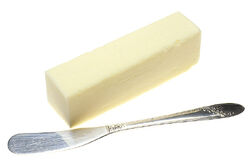 A stick of butter is equivalent to: